One of the jobs I had while working my way through college was selling Manuel's Hot Tamales on the weekends on the corner of Veterans Blvd. and Causeway Blvd. in New Orleans. 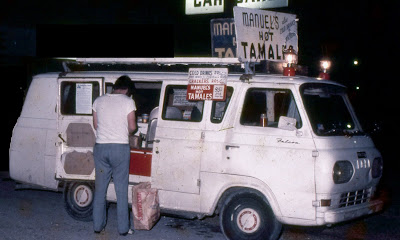 My dad Lamar Barthet started selling the Crescent City's most favorite hot tamales in the early 1960's after talking Manuel into letting someone else sell the hot tamales he had been making for years at his home on Carrollton Avenue, half a block west of Canal Street. 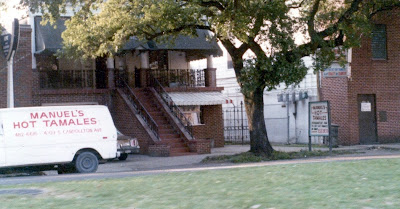 Each night Manuel would roll his vending cart over to the corner of Carrollton Avenue and Canal Street where he gradually became a legend selling the great-tasting tamales, still wrapped in corn shucks as all hot tamales originally were wrapped.

They first used Willis Jeeps to sell out of, but later my dad bought a Ford Falcon van (pictured above) and that was used for several years. From the Rockery Inn site, he moved to the intersection of Causeway and Veterans next to Lakeside shopping center. We supplied many a thousand dozen of hot tamales to folks holding football watching parties at home.

When the construction on the intersection forced him away from that corner, he moved a couple of blocks west to the area in front of the General Tire outlet, near Barnes and Noble.

In later years he opened up a satellite tamale vending cart on Williams Blvd., near the airport, in front of the Dorignac's Food Center. I would sell tamales out of that cart on the weekends sometimes when the guy he had hired couldn't make it or wanted to take some time off. Most of the time, however, I would sit with my dad at Causeway and Veterans, dishing out and wrapping up dozens of tamales. My dad was the first to use aluminum foil to wrap the tamales, and put on extra gravy that made them, well, pretty juicy and flavorful (more than they already were.) 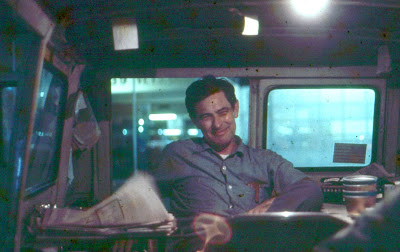 In between sales, we would listen to the radio or talk about the events of the week. The late 1960's were a busy time, so we had a lot to talk about.

I ate a good many hot tamales in my younger days, as a result, and I can't help but think that eating Manuel's Hot Tamales helped make me the fine upstanding person I am today. At least selling them on the weekend helped pay for college expenses that weren't otherwise covered by my other jobs. 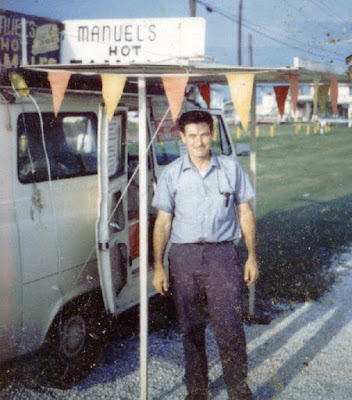