For a couple of years back in the early 1980's I was a field editor with Construction News magazine. The publication was based in Little Rock, Arkansas, and covered several states. My territory for news coverage was all of Louisiana and southernmost Mississippi.

There were several interesting experiences while I worked for Construction News, and I thought I would share some of them with you here.

The most memorable, I suppose, is the time I was taken out into the middle of the Louisiana marshlands on an airboat to take pictures of a backhoe that was digging a pipeline trench through the swamps. I wrote a blog item about that three years ago, so to read more about that, CLICK ON THIS LINK. 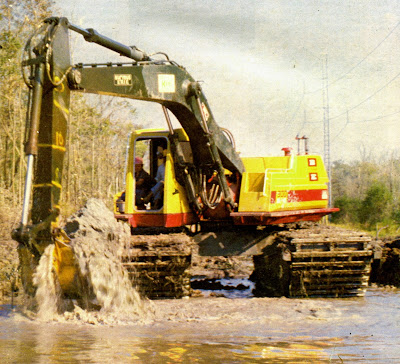 But I also wrote numerous other articles about less environmentally impactful projects.

There was the time my car got stuck in the deep sand of a construction driveway. I was visiting the project manager for an interview about the construction project, but the whole site was dirt and sand. To get my car out of the sand, I had to get a nearby bulldozer operator to give me a push/shove that literally lifted me up enough to get my tires back on the driveable surface so I could get out of there. If you ever need a push out of the mud or sand, I recommend that you get a bulldozer behind you to make quick work out of it.

Then there was the time I was visiting a construction site near the Mississippi River in Jefferson Parish. It was located on the other side of the levee next to the Mississippi River near Oschner Foundation Hospital. The construction project was a gigantic deep hole in the batture alongside the edge of the river. We are talking about a concrete lined square hole, about 60 feet by 60 feet wide, and some 40 feet deep. It was part of a water intake chamber for some kind of water purification plant.

So I parked my car on the dry land side of the levee, walked over the top of the levee to where the construction site was, and saw the top rim of the concrete structure. But the top of the retaining wall was only about two feet above ground level from my point of view. I had no idea that the on other side of the short concrete wall, it went 40 feet down into the mud.

So, when I saw the project manager standing on the top of the wall, I went over and jumped up on the two foot concrete ridge and almost fell over onto the other side, which would have been a heck of a fall. Fortunately I caught myself at just the last second, and managed to balance myself on the foot wide concrete ledge. Although I think I managed to keep my calm,it was a shock to find out that the wall was two feet tall on one side and forty feet deep on the other side.

I managed to talk to the project manager calmly for a few seconds and casually stepped down off the ledge (back down on the two foot tall side). It was great to get on solid ground again, and look back over the two foot wall into the giant 60 foot by 60 foot wide and 40 foot deep hole. Took a few pictures and got the heck out of there. I couldn't imagine the water pressure being held back by a 40 foot deep wall dug just yards from the edge of the Mississippi River but that's what design engineers do. 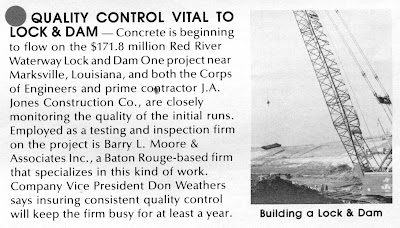 A Lock and Dam Project

Another story assignment brought me to the construction of a lock and dam on a huge irrigation canal off the Atchafalaya River near Krotz Springs. It was a similar project to the one alongside the Mississippi River, so I was ready for it. After I drove to the middle of the Atchafalaya swamp, turned onto a levee top gravel road, and drove another several miles. Sure enough, there was the giant concrete box being built alongside the irrigation canal. I parked my car, walked up to the two foot high concrete ledge, and, when I looked over the ledge, there was the 40 foot deep concrete-lined box.

There was also a story that involved a new construction technique in Lafayette where a six story office building was being built around an extremely strong central concrete core. The core was to give the building much better survivability in a hurricane situation. That was very interesting, a merging of conventional building techniques with prestressed concrete boxes. 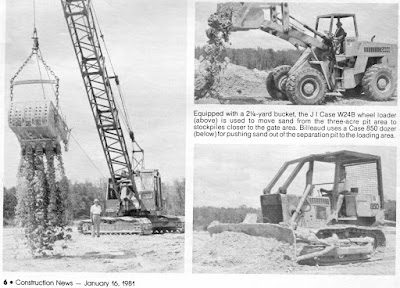 Other stories would involve hydraulic elevators in short-rise office buildings, the driving of sheet piling to re-inforce the levee on the Atchafalaya River somewhere down in Cajun country, and numerous visits to construction equipment sales outlets for information about Caterpillar, Case, Manitowoc Cranes, Ditch Witch, Bobcat, Grove and John Deere equipment. Part of my job was to write articles about new kinds of construction equipment that may be of use in Louisiana and Mississippi construction projects.

Inside the Chemical Plants

The two least favorite story assignments dealt with articles telling about how construction equipment was used inside chemical plants. I spent a day inside a chemical plant on the river near Baton Rouge, talking to the project manager about the use of hydraulic cranes within extremely complex piping environments. I also spent a day inside a chemical plant way over in Lake Charles gathering information on new techniques being used in fitting new processing units within existing complexes. While both articles were interesting, the atmosphere environment inside the chemical plants did a number on my lungs (and also on my car's finish, even though it was parked out in the parking lot.) I feel for the people who work inside chemical plants every day, hopefully they are wearing breathing masks by this time.

There were other chemical plant based articles, one in the Shell refinery in Norco, and another in the same general area, but I had, by that time, learned to drive in, get the interview, take a few pictures, and get out as quickly as possible. 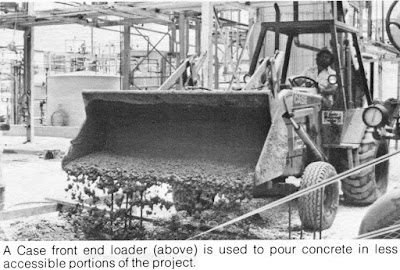 I especially enjoyed helping to write one article which was telling about the introduction of computers into the construction project offices. Remember, this was back in 1980, and computers were just entering the work world. Previous to that they had been gigantic boxes with flashing lights in university research centers. The new construction computers were beginning to help contractors keep track of all kinds of things, from materials, to project scheduling, equipment allocations and, of course, work crew payrolls. Helping explain the possibilities of using computers to contractors in the construction field was quite a challenge.

Working for Construction News was an experience I wouldn't trade for anything, because in addition in doing information gathering and taking pictures at construction sites all over the state, I also got to go to group meetings and annual parties for the two major construction contractor associations. While doing that was fun, it was not as much fun as taking pictures of bulldozers, cranes, pile-drivers, front end loaders and backhoes in action.

The contractors were great people doing important work, and I was proud to write articles and take pictures showcasing their skills and expertise in meeting the challenge of building stuff in Louisiana soils. The next time you drive on a highway, visit a high rise office building, or see a flood wall made of sheet piling with a re-inforced concrete cap, think of the folks who made all that happen. 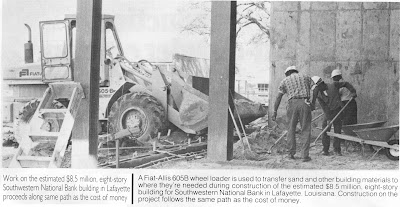 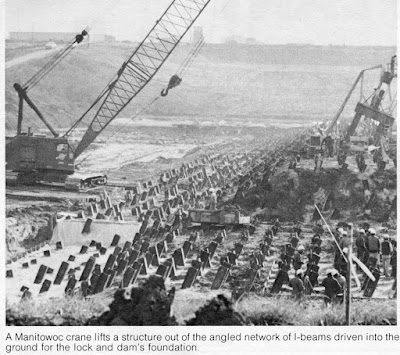 I even wrote an article about a sewerline construction project in Covington, not far from my house.