History book publisher Dan Ellis writes extensive histories of area communities, using the power of social media and community pride to bring it all together. In 1999 he wrote a history of the City Of Slidell.  He was glad to be able to provide a thoroughly documented history book for the community, as he has done for numerous other communities across the area that also needed their histories to be researched, verified, and published. 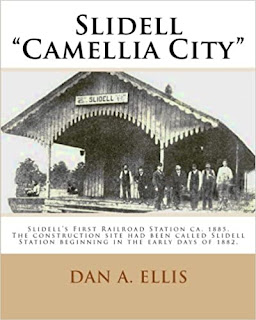 He's self-published 39 books in total, preserving in print the community histories of dozens of towns across the Mississippi Gulf Coast, Louisiana and even Eureka Springs, Ark., where he lived for nine years after evacuating for Hurricane Katrina. 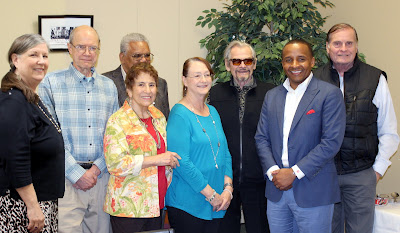 But he recently returned home to Pass Christian to attend a special reception paying tribute to his history gathering and book writing expertise. A group of his friends at the Pass Christian Historical Society showed their appreciation for his work and accomplishments.


Three years ago, he returned from Eureka Springs and moved to Gulfport, but all his friends were glad he came back to the Pass to be honored and thanked for his efforts to preserve history and keep it available via print. "He has done so much work to help Pass Christian and the Coast," said one society officer. 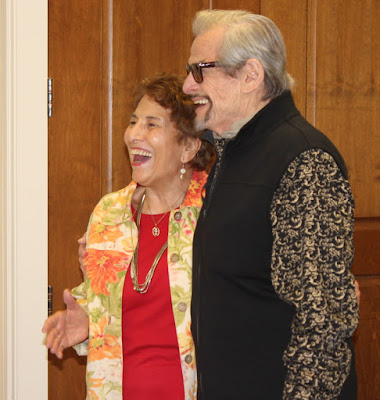 Dan recalled how he got started in public writing back in the 1980's. He began writing a column in a business journal called City Business News. He was in the computer industry at the time, so he wrote about computers.  "People at that time didn't know what computers were or what they could do," he said. "The first computer I had was a big, big thing and cost $20,000 a month just to rent. You couldn't even buy it. And talk about memory? I had a big box that held the memory, 4K of memory."

"Nowadays computers are everywhere. We don't even know them anymore. They are in our refrigerators, in our phones, in our automobiles. When I retired here in Pass Christian, I decided to write books," he explained. He wrote his first history book in 1995 about Diamondhead, a community on the north side of Bay of Saint Louis. It was the first in a series of what he called 'Discovery Books.'

"Not too long after that, I started work on a history of St. Paul Parish - Jubilee 3," telling the story of St. Paul Church in Pass Christian.  That's when he started getting involved in printing his own books by taking the manuscripts down to Kinko's copying service. It was a challenge to print, collate, and attach the covers to the books, so he didn't print many copies at first. He referred to the process of printing his books at Kinko's as "getting kinky."

Publishing 10 at a Time

He'd sell the ten or twenty books that he had produced, then go back to Kinko's to get another 20 printed up. For the printing of the St. Paul's book, he came up with the idea of having people donate an amount to have a "memorial" printed up in the ads section of the book, and that's how they paid to have it printed and published.

After the Diamondhead Discovery book, he wrote several other discovery books: Pass Christian in 1996, Bay St. Louis in 1997, and the Gulfport Centennial in 1998. Each of his early books was revised and reprinted after he returned from living in Eureka Springs in 2013. 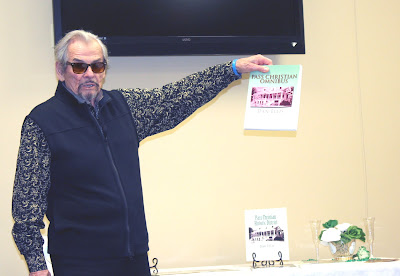 The early editions still have their integrity, he said, but the expanded revised books are much more comprehensive. "You know what I tell people about my books? You don't pick one up and read it from page one til the end. You open it anywhere in between and start reading whatever you find of interest," he said. "That's how easy it is to become informed about your community."

It was fun to write the book about Pass Christian, he said, but he is also proud of his books on the entire Gulf Coast. "These books have more information about the Gulf Coast than any other book anywhere," he stated. He mentioned that several of his books had cover art done by one of the members of the historical society. 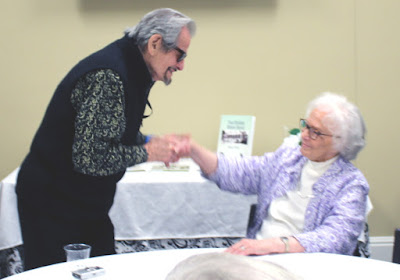 One of his books tell all about the old hotels along the Gulf Coast, another tells about the impact of Hurricane Katrina. There are books about all the lighthouses, and stories about individual lighthouses are included in all the communities that have a lighthouse.

He is now writing his 40th book. Of the 39 books for sale on Amazon, 13 of them are also available as Kindle e-books, he said.

Ellis denied that he was a historian, but instead he considers himself a "historiographer," someone who writes history. "That's what I do," he said. Historians research, learn it, share it, preserve it, keep history close to their hearts. "In my case, I did a lot of reading, weeks and weeks of it,  months and months of it, and this was before the internet where you can now pick up your phone and ask it any question in the world," he explained.

In the beginning, he became a self-publisher because  "the big publishers aren't interested in books that are only going to sell 100 copies. I had to become a self-publisher. Lo and behold, 15 years after I started doing it with Kinko's, Amazon comes along and offers do-it-yourself self-publishing through instant printing on demand." Through Amazon, anybody can become a publisher, with good quality books being the result, he feels.

The Process of Doing a Book

"So before the internet, I did a lot of the research on my own.  I talked to people, I read old typewritten reports from years ago, went to library research rooms," he said. He named several well-known Gulf Coast historians who laid the groundwork for today's history gathering and collection.

"Personal interviews and community contacts were wonderful," he recalled, citing the many people who invited him into their homes to view their collections of old books, scrapbooks, postcard collections, and the telling of the "real stories" of the people involved in history.

He encourages people to get together, hold meetings, talk to each other about the old family histories, share memories, share pictures.  It is this kind of gathering first-hand knowledge from the people whose families had lived the history that makes the difference. They need to share anecdotes, take notes, and start making the inter-connections of local history, he feels.

"And the local historical society should give them a certificate or something to show its appreciation of them for sharing their information," he added. He belongs to about six different historical societies,  and he encourages all members to step up and work with the societies to preserve area history.

Over the years, as the internet became more available and as the social media phenomena Facebook was joined by older members of the community, Dan would create a Facebook page or a webpage that invited visitors to share their stories and their pictures of their special community. Having people come to him via Facebook was helpful. "It ended the drudgery of research work," he said. He has since closed down some of the community websites he created since people aren't using them any longer.

The most used Facebook pages he created are the ones for DeLisle and Henderson Point. "They love it," he stated.

It was a template he would follow down through the past decade to acquire a wealth of information that, with some effort, resulted in books that will be passed on from one generation to the next.

One by one, historical society members gave their testimony of how important Dan's work was, in encouraging memories to be shared, in writing down those memories, and digging out the old photographs and postcards to be scanned and printed in his books. He worked with fellow society members on the 'lighthouse committee' and the Bicentennial Committee, as well as his premier effort to resuscitate interest in the Old Spanish Trail, a coast-to-coast highway program that pioneered family motoring 100 years ago.

"Putting information together about the Old Spanish Trail was my most interesting project," he commented, "and it's still ongoing."

Ellis attended several Old Spanish Trail  rejuvenation conferences and then put on a couple of conferences himself, one in Pass Christian in 2017 and another in Bay St. Louis in 2018. I was a speaker at the Pass Christian conference, and it brought several speakers from across the region together to remember the great new key to adventure: the family automobile.

Through Dan's efforts, signs designating the Old Spanish Trail's route along the Mississippi Gulf Coast scenic beach highway have been produced and installed, and more are on the way.

One of his published works is a reprint of a book that was originally written and printed in 1889. "It is a beautiful book, and I didn't want to put in it anything of mine, so I just reprinted it, and put in a few pictures," he explained. It was difficult for him not to put any of his words into it, but it is a beautiful book as it is so he left it alone, he said.

"He's a promoter," one society member said, "and he makes things happen." That together with his computer knowledge and working with printers to get the books produced, it has meant a lot to the communities that his talents have touched. He was a motivating force as well, inspiring others to get involved in researching history. The society has benefited greatly from his encouragement, guidance and perseverance.

"Dan stimulated our curiosity and our imaginations to find out more about our little community," another member stated, thanking him for his diligence in pestering people, annoying people, and doing whatever he had to do to get the key historical information and photographs that now mean so much to the community.

He admitted that he has written an autobiography, a "kiss and tell" book about his life and times. "But I don't recommend anyone buy it and read it," he laughed.

He is planning to write a book about his early life in New Orleans, but it's about a New Orleans that isn't there any longer. When asked if he ever wrote poetry under a different name, he answered no. "If I'm going to write anything, it's going to be under my own name. I'm too proud of myself to do anything else." 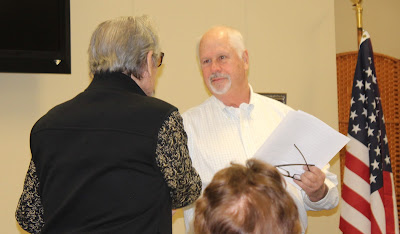 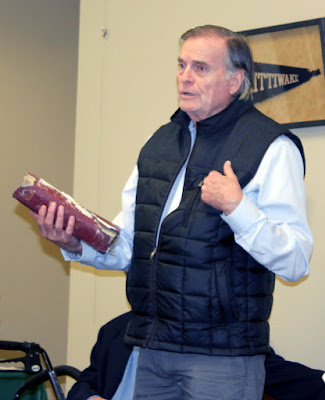 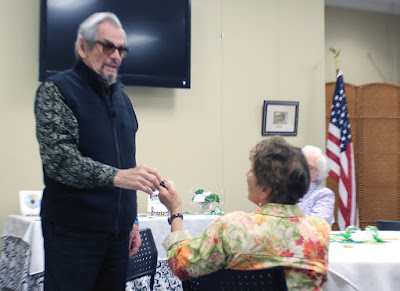 He gave a flash drive with all of his files and information on Pass Christian history to the president of the historical group. 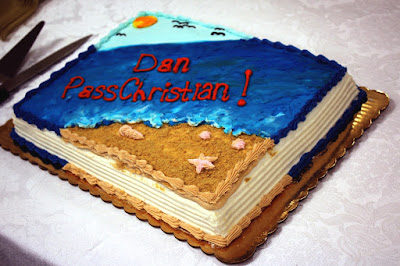 There was even a cake! 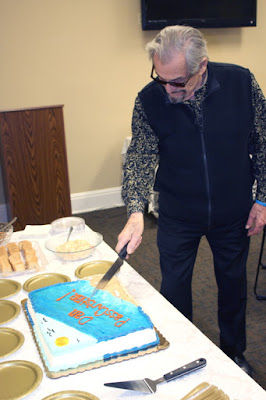 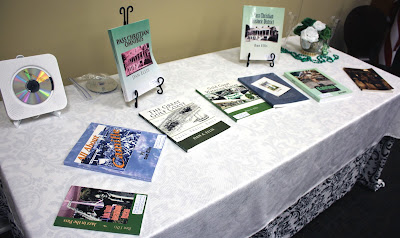 A display of some of his books 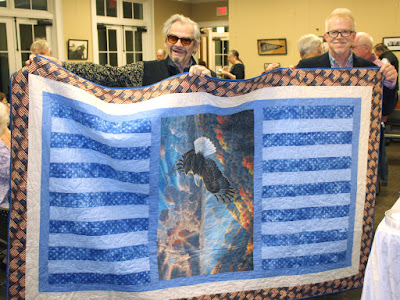 
"It's good to be here, back with all you folks," Ellis told the crowd at the meeting. "It's overwhelming, and makes me feel good. I loved it here, and I always tell people that if they want to make friends, they just need to go to Pass Christian."